Games Workshop has kindly sent me a copy of Warcry Catacombs and I’m going to lift the lid and review it’s contents and talk about the new rules. This set is up for pre-order today (24th October 2020) and will be released on Saturday 31st October. Check out this in-depth review after the jump. 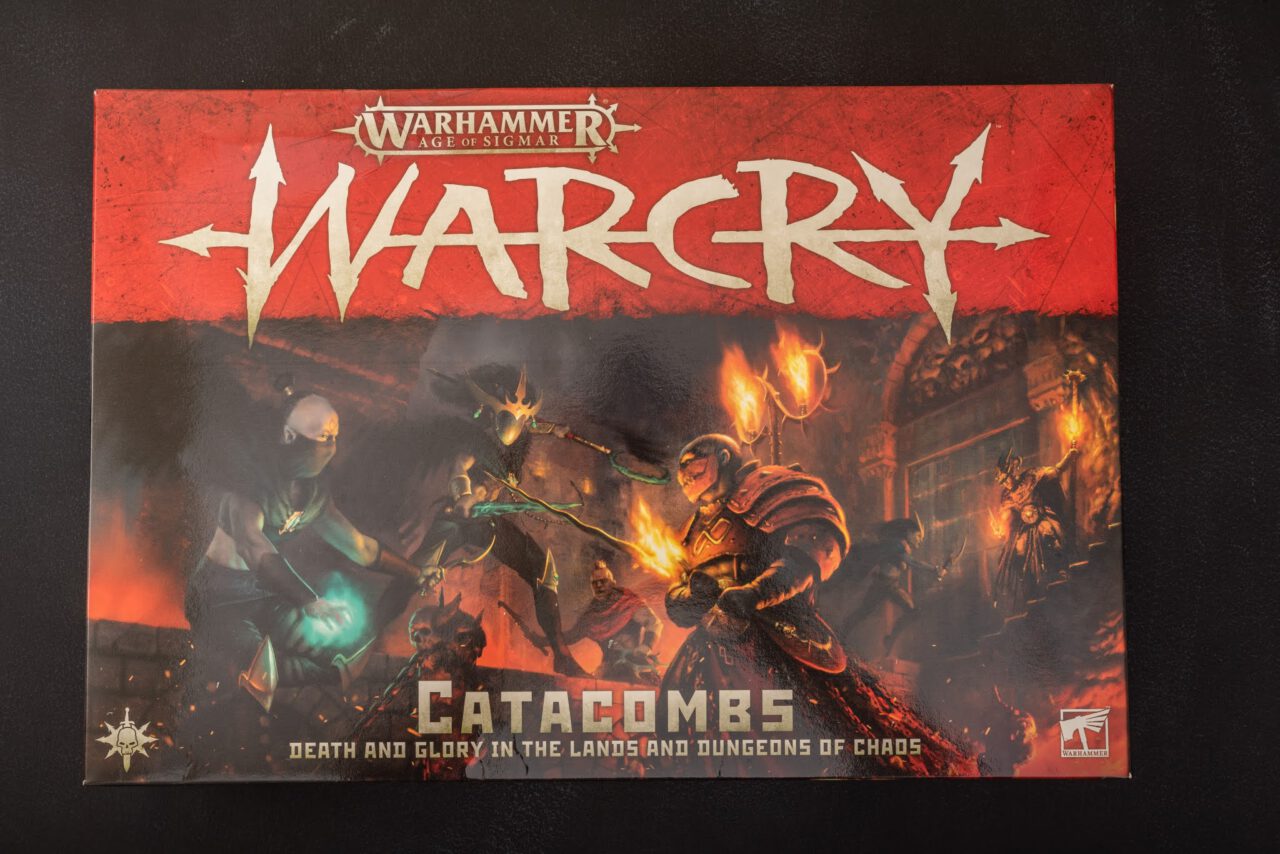 Features
This hefty box is deep and packed to the top with model sprues, books, cards, a reversible gaming board and more.

The original Warcry Starter Set had card decks for deployment maps, terrain maps, victory conditions and twists. It also had a couple of cards with the universal abilities on. These separate cards are not included, instead they are printed in the Core Rule Book. No chaotic beasts like Furies or Raptoryx are included in the game either. You don’t need the deployment decks or chaotic beasts to play the Warcry Catacombs expansion.

Accessibility
It is too early to say if this will sell out instantly, or if it will warm shelves. We do know it’s predecessor the Warcry Starter set sold out after a few months and Games Workshop didn’t restock the boxed game it. I’m hoping the stock levels are sufficient enough. This set will be available on the Games Workshop online store and in their Warhammer Stores as well independent stores and websites.

How accessible is Warcry Catacombs to a new person? Well, it’s a game in a box, but you will need some plastic clippers and plastic glue to assemble the models. If you want to paint your models, you’ll also need primer, paints and brushes, none of that is included in this set. This is standard for Games Workshop big box games.

The Miniatures
The dungeon terrain pieces evoke a strong feeling of nostalgia. Warhammer Quest and Hero Quest are clearly strong influences. There are six open and four closed doorways, two metal bridges and two wooden bridges and a whole host Unique Dungeon Features including: The Wall Breach, The Arms Stash, The Cursed Caskets, Two Levers, The Shattered Pillars, The Sewer and The Collapsed Doorway. You also get a small amount of overground ruins.

The two included warbands are the Khainite Shadowstalkers and Scions of the Flame. Khainites are Aelves who have sold their soul to the Shadow Queen Morathi. Hailing from Ulgu the Shadow Realm, they use the Umbral Web to travel between realms. Shadowstalkers are Morathi’s Assassins using Shadow Magic, this can be seen in the models’ capes that are forming shapes.

The Scions of the Flame are a human warband that like other cultists are trying to catch the eye of Archaon the Everchosen. These Religious Zealots come from Aqshy the Realm of Fire. Consuming native wildlife like magmavores or ash salamanders, the chosen are embued with Aqshyian Magic. Those not deemed worthy are consumed by fire and die. This explains why some of the models are on fire. They are lit!

The sculpting on the miniatures is incredible. These aren’t push fit models. They’re complex kits and they are made up out of lots of small intricate parts. The glue contact points for some of the models are just a couple of millimetres in diameter. Several of the models from both warbands include multiple weapon options so you can choose which weapon load out you wish to build

Fun factor
I’ve played a lot of Warcry in the past year and it’s my favourite game. It’s so much fun playing a campaign and seeing your Warband gain glory and buy territory. That original part of the game hasn’t changed. The Core Rule Book included in Warcry Catacombs is identical to the Starter Set, they haven’t even updated it with the errata. What has changed is the inclusion of a separate expansion book called Warcry Catacombs and this is where the fun gets turned up to eleven.

The Dungeon game uses the core rules with some exceptions. Set up is different. You now take it turns placing doors on on the board. You also get to place two Unique Dungeon Features each There are a total of seven to choose from. Each has special rules and tactical benefits. Placing The Arms Stash will give fighters +1 attack when nearby. The Wallbreach is exactly that, a hole in the wall that allows passage through, levers can open closed doors, the sewer allows reinforcements to arrive through it and lots of other cool thematic rules.

Warcry Catacombs is the ultimate floor is lava game and it’s possible to fall into the lava and instant kill your opponent (or yourself) with crumbling weakened bridges, or scoring crits on an opponent who is 1/2” away from an pit edge and then rolling a 1 or even using one of the new Dungeon Universal Rules that allows you push an opponent who is 1/2” from the edge by rolling off and adding your toughness.

Other Univeral Dungeon Abilites are breach door, which is like a test of strength to see if you can open the door. Fighters can also lurk in the shadows if you’re near a wall and more than 6” away from the enemy which means you’re not visible.

There’s loads more including campaigns for the included Warbands, fated quests for any Warbands, so plenty of brand new gaming opportunities.

Value
Value for money is always subjective to each individual. But we have a couple of benchmarks. Last year’s Warcry Starter Set was £100. The Warcry Catacombs set is RRP £125. We can itemise the contents of this set as:
•  Khainite Warband £30
•  Scions of the Flame £30
•  Core Rule Book £25
•  Catacombs Expansion Book £20
•  Ravaged Lands (Dungeon Equivalent) £55
•  Azyrite Ruined Chapel £35
Total comes to £195.

My conclusion is this shouldn’t be compared to the original starter set. This isn’t a starter set. It’s not labelled anywhere on the box as a starter set. It should be viewed as a standalone dungeon skirmish game with the added bonus of being able to play through the original Campaigns in the Core Rule Book with a little modification like using less terrain and taking out chaotic beast twist cards. If they could have squeezed in the extra terrain pieces, the deployment cards and the chaotic beasts it would have given new players everything they need at a higher price point, potentially scaring off new players. People who own the first starter set would be paying extra for things they don’t need. Keeping the Core Book the same and not changing it to include the latest errata felt odd at first but means it doesn’t invalidate anyone’s original purchase. Including a separate Expansion Book does seem like the best option. I feel what Games Workshop has achieved is a great balance and because the first set sold out so fast they’ve had to release Warcry Catacombs sooner than they probably had it scheduled for and if that wasn’t enough, they’ve done it during a Global Pandemic. With a question mark over future availability this is still a solid 9 out of 10 for me.