Games Workshop has kindly sent me a copy of Tome of Champions 2020 to check out and share my thoughts with. If you want to test your warband by Pit Fighting, or campaign in Soroth Kor the Silent City or maybe you and a friend want to take on a Mega Gargant or a Greater Daemon of Tzeentch then you’re going to want this book! Read my review after the jump.

Features
Tome of Champions 2020 is an annual expansion to the Warcry Skirmish Game. You’ll need a copy of the Warcry Core Rulebook, miniatures, rules for your miniatures and terrain to use the contents of Tome of Champions. This book is about expanding your Warcry experience with new ways to play. 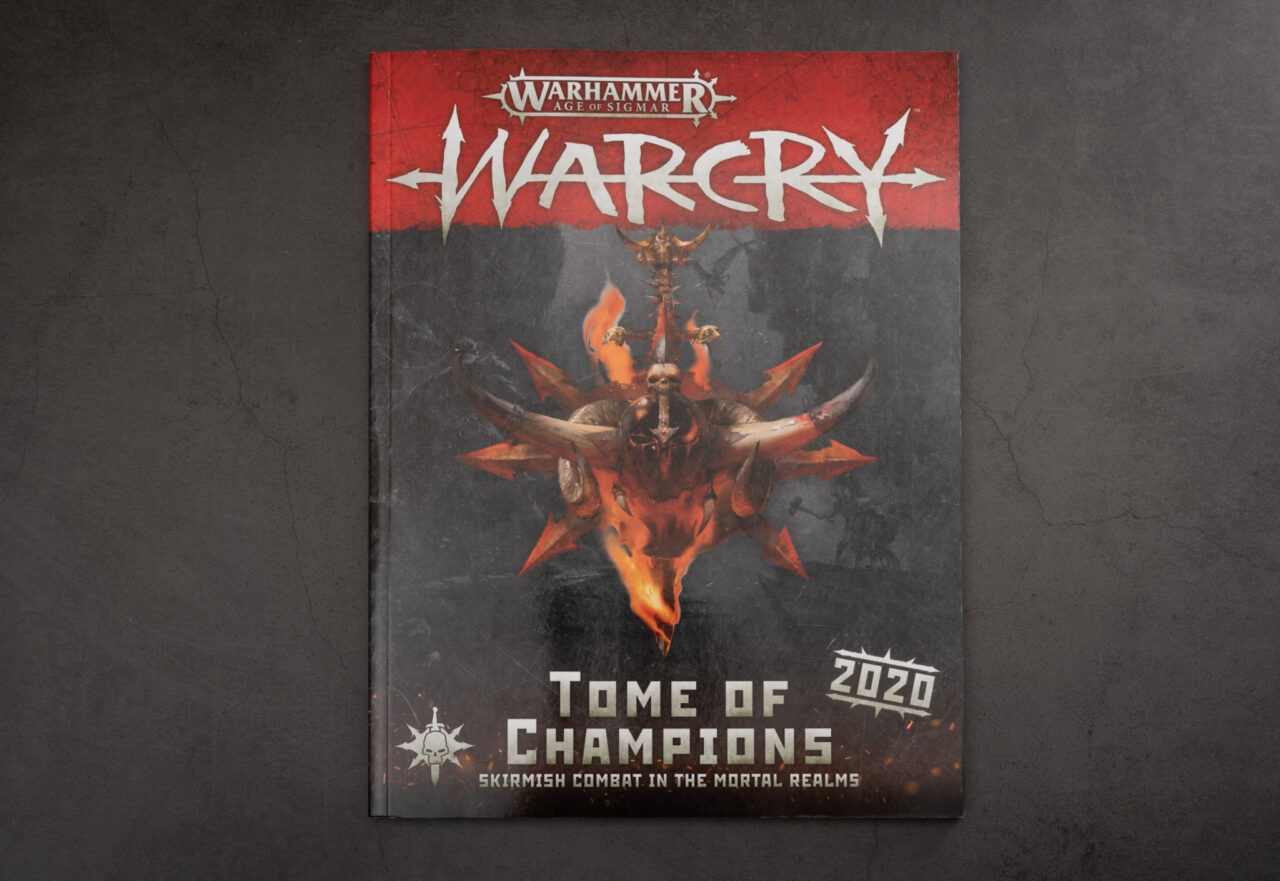 Warcry has three ways to play the game. Open, Narrative and Matched Play. Tome of Champions includes content for all three areas of the game with Narrative Play getting the most content, which makes perfect sense as there is just so much scope to add characterful elements to a narrative game.

It’s a shame there aren’t any fighter profiles included in this year’s version. You’ll find those in the new Grand Alliance books now. The book is also 16 pages smaller than last year. I feel like some fighter cards, maybe a unique mercenary warband or something would have filled this gap.

Another interesting thing I noticed was any Battle Plan terrain layouts featured throughout the book use the new Warcry Catacombs terrain not the original Starter Set, but don’t worry it does say you can swap the terrain out for similar terrain or use a different Battle Plan card from a Ravaged Lands set you own. There are also terrain generator ideas in the Appendix. So, they have you covered.

Gameplay
Right at the start of the book we get some updated rules for the Core Rulebook. This isn’t a full Errata. The first is putting all the faction Runemarks into Grand Alliances such as Order, Chaos etc. Interestingly, the Order Grand Alliance is split into two, there is Order and then there is Cities of Sigmar.

Other rules updates include the new Glory Points table (it’s the same as the one in the downloadable Errata, Tome of Champions 2019). Then there is a new replacement paragraph for Reinforcements and a rule to allow Consumable Lesser Artefacts to be used as a bonus action instead of a replacement action. So it’ll be worth saving up your artefacts for tricky Convergences now! 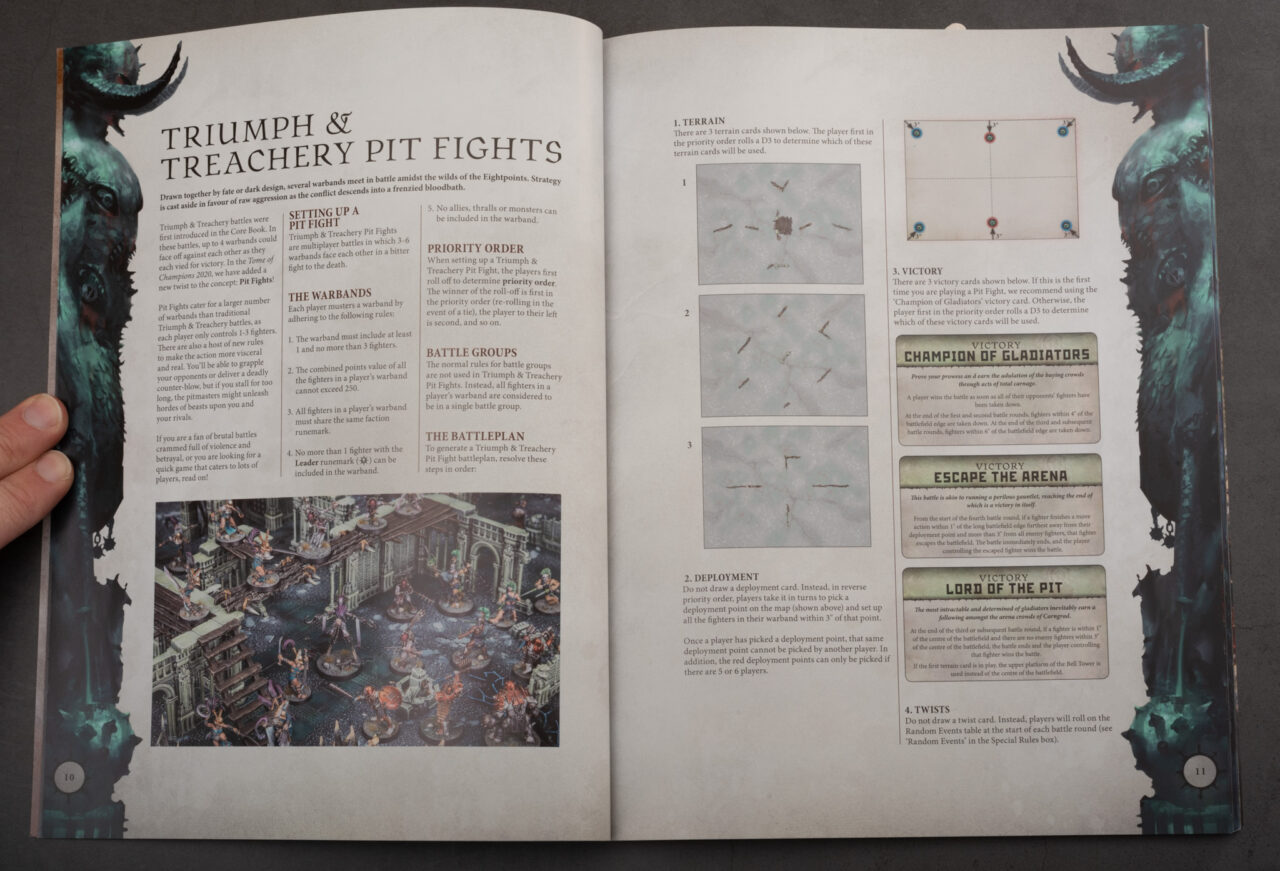 For Open Play there is an updated Triumph and Treachery game. These games allow up to 4 warbands to fight off against each other but the update here is rules for Pit Fighting. It include terrain maps and rules for overground Pit Fights and deployment rules for Dungeon Pit Fights. It also gives you the option to include these battles in your Narrative Campaigns.

The Narrative Play section starts with background information about the Silent City, Soroth Kor and then proceeds to explain how to play this different campaign game that is based on a single gaming group playing games over three months with the end of each month being the Convergence game. Another big change for this campaign is Warbands can dominate up to 15 territories and grow to up to 2000pts in size.

The second part of the Narrative Play section are 6 Narrative Battles. A player who won the Priority roll can choose to roll on the narrative Battles table instead of drawing a Battle Plan card. The missions look fun and the big change here is they each include a Battle Plan Ability, for example if you’re playing Storm the Encampment you can use [Double] Burn to the Ground to set fire to terrain! 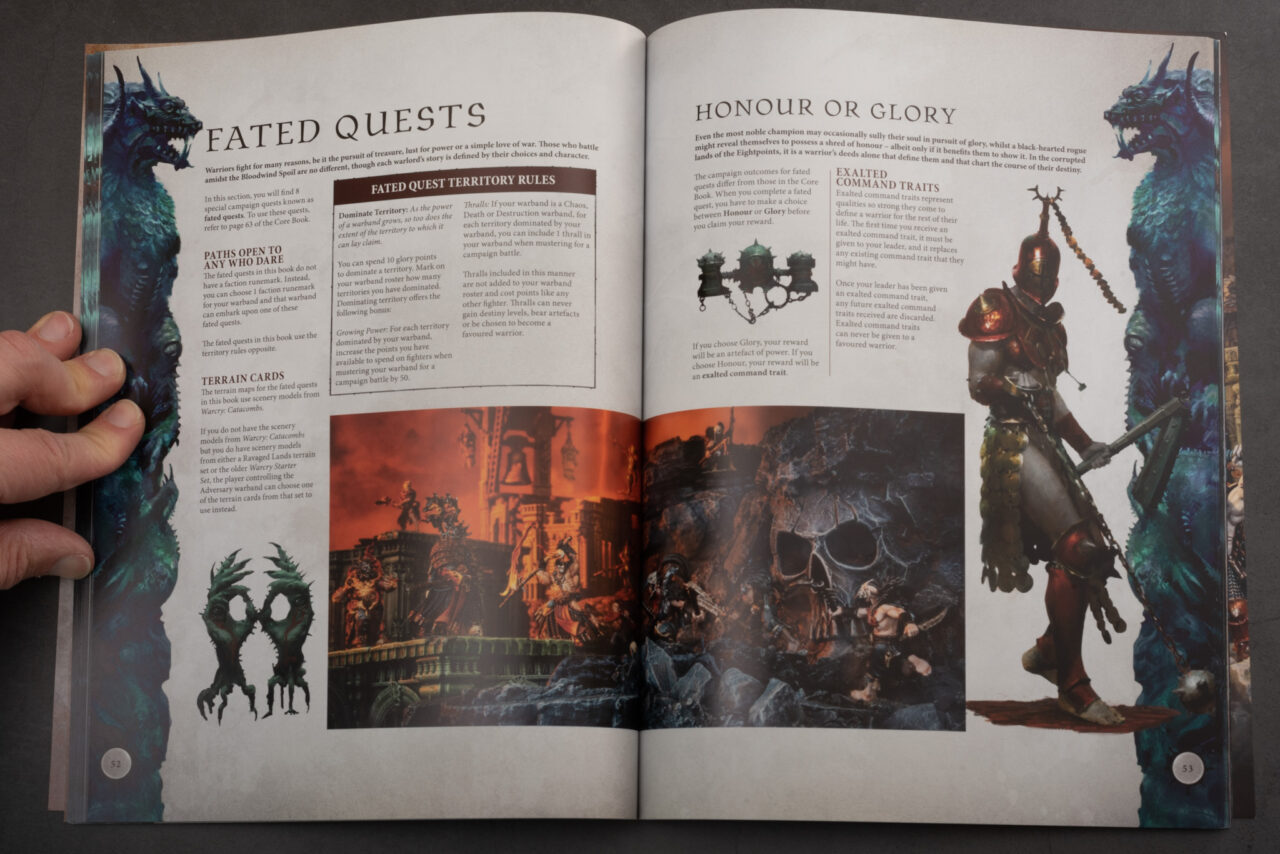 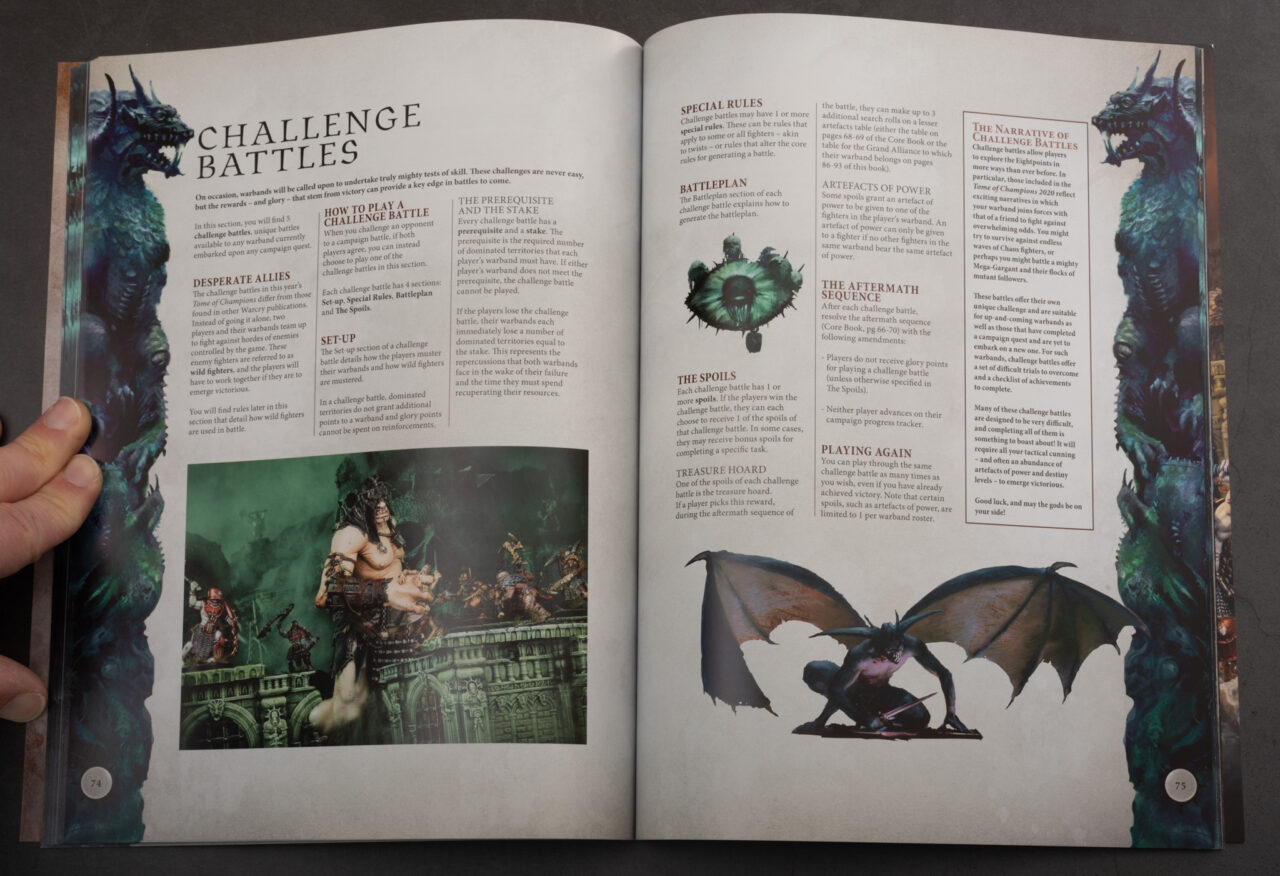 The Penultimate part to the Narrative section is the most exciting in my opinion: Challenge Battles! I’ve played a couple of Challenge battles from the Monsters and Mercenary book and they’re the most fun because you have to build up to it in a campaign and earn glory and territory. These new Challenge Battles are co-operative. You and your teammate take your own warbands and battle “armies” of Wild Fighters controlled by the game. There are 5 Challenge Battles. The first features fighters with the Death Runemark, the second is Gloomspite Gitz, the third is a Mega Gargant, Raptoryx and Furies, the Fourth is Tzeentch Arcanites and a Lord of Change and the fifth is any Chaos Faction including Chaotic Beasts… oh and in case you’re wondering, a Mega Gargant has 150 wounds!

The final part of the Narrative Campaign is Lesser Artefact tables for Chaos, Order, Death and Destruction. I’m surprised these aren’t included in the new faction books? I guess putting them in an annual publication means you can refresh them every year. 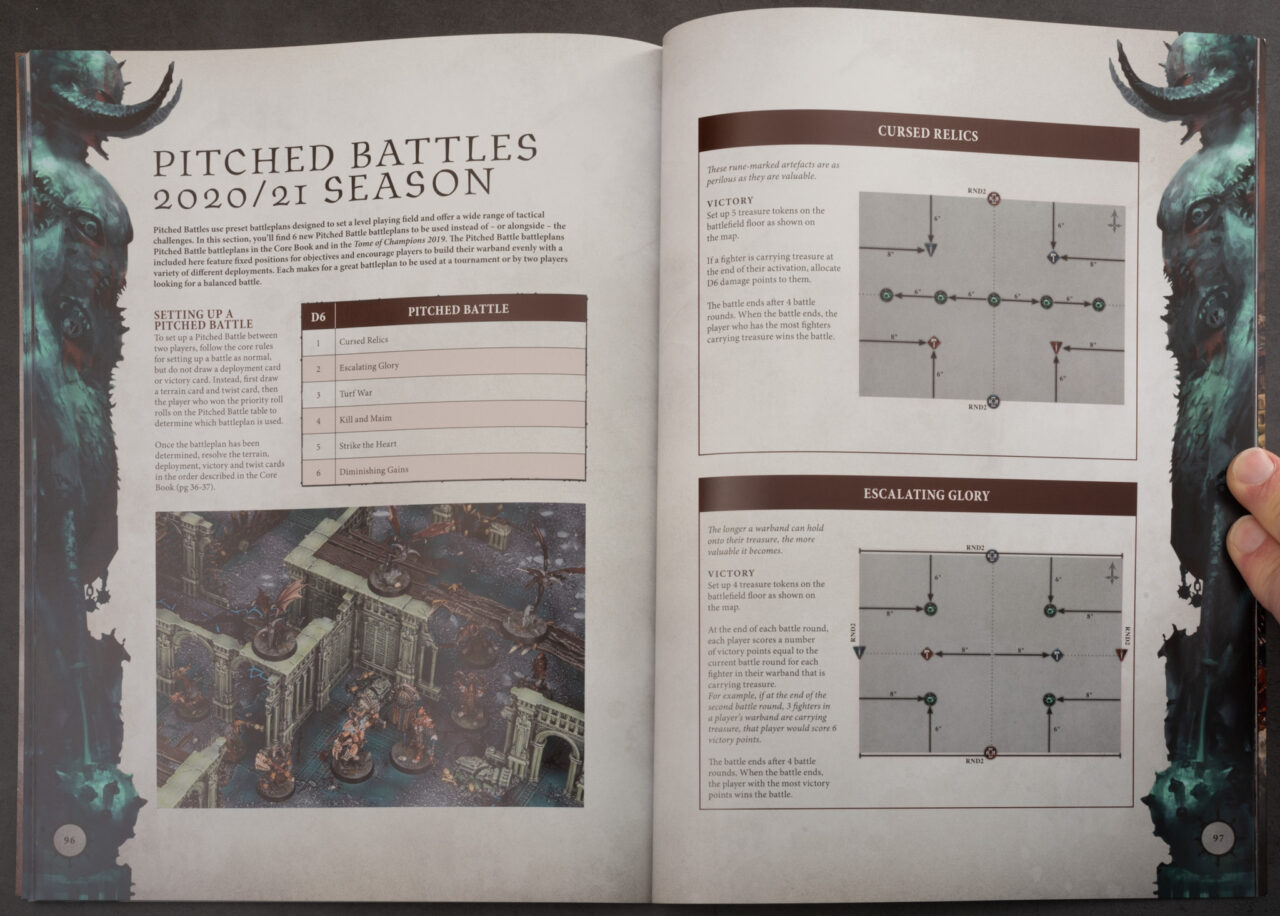 Then we get to the Match Play section. This section can be used instead of or alongside the Core Rulebook and Tome of Champions 2019. It’s 6 pitched battles and expanded rules for Hidden Agendas. There are also Escalation Tournament rules that allow you to link your games and gain Artefacts and Command Traits during a tournament.

Finally the back of the book has the Appendix which reprints the Roaming Beasts rules (Wild Cave Creatures and Restless Death), Open Play Terrain Generators and the Warcry Tournament Roster that were previously seen in the Tome of Champions 2019.

Fun factor
I think it’s telling that the matched play section is only 9 pages long. With the bulk of the book being story driven Narrative Play this is designed for fun. Who wouldn’t want to start a new Fated Quest Campaign with a new Warband fighting on one of the new Dungeon boards and experience some of the new Narrative Battles, earning faction specific Artefacts and culminating in Challenge Battle of titanic proportions maybe you’re taking on 2000pts of Death Wild Fighters or perhaps 800pts of Tzeentch Arcanites and Lord of Change is more your thing. It all blends together and builds upon the previous rules without feeling bloated. It’s so much fun. I can’t wait to get started.

Did you like this post? Then why not support Tale of Painters by using our links for your next purchases on ebay / Amazon / Zavvi / MyGeekBox. No extra costs for you and we'll get a small kickback. Or become a patron on Patreon for exclusive tutorials, guides, and behind the scenes content. We are hobbyists like you and do all of this in our spare time. Your support will help us cover our monthly costs and fund future projects so we can bring you more and better content. Thank you very much!

If you already have the 2019 Tome of Champions then a part of you might be frustrated to the same Roaming Beasts and Terrain Generator tables but I think Games Workshop are right to include them as an Appendix because if you’re new to Warcry you might not own last year’s book. You might also be frustrated that the book is 16 pages smaller than last year and doesn’t include any of the fighter cards that were in the previous book. Instead those fighter cards are now included in separate Grand Alliance books. For me though, these are tiny little gripes that don’t impact on the overall content of the book. If you play Narrative Games (and I recommend you do as they’re the best) then this book is fantastic at breathing new life into your campaigns. If you bought the Warcry: Catacombs Board Pack then you’ll want this book for the Fated Quests. The Challenge Quests are the shining star for me though. I really want to get a Mega Gargant now and see if myself and a mate can take it out of action.

Review: The Emperor’s Will – Agents of the Imperium (Artbook)