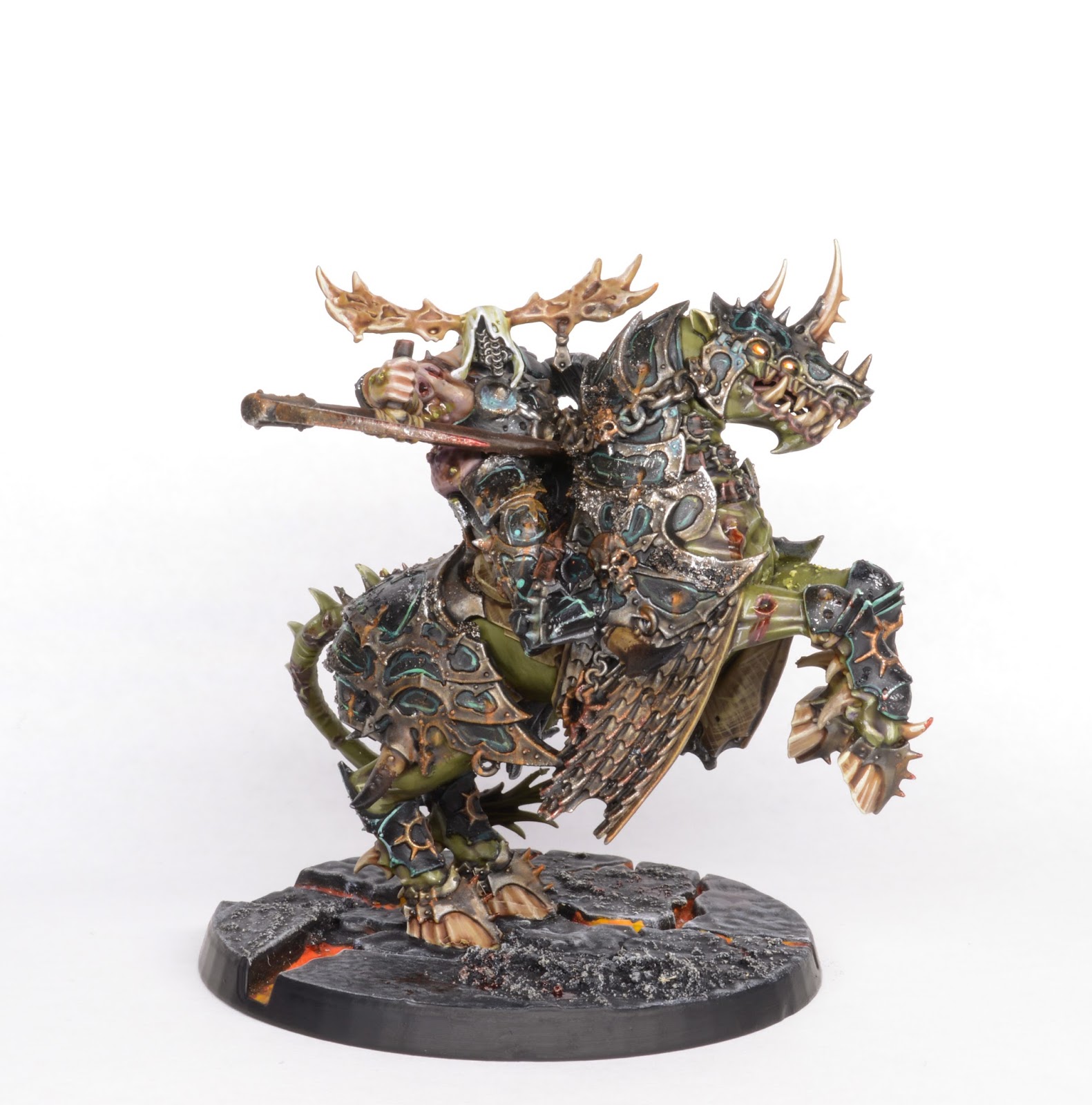 Hey everyone, I’m really happy to show you the latest addition to my Nurgle Rotbringers army, my converted Harbinger of Decay. I wasn’t a big fan of the original model and wanted him to stand out a bit more on the battlefield, so I converted one. Click to see more and learn how I built and painted this! 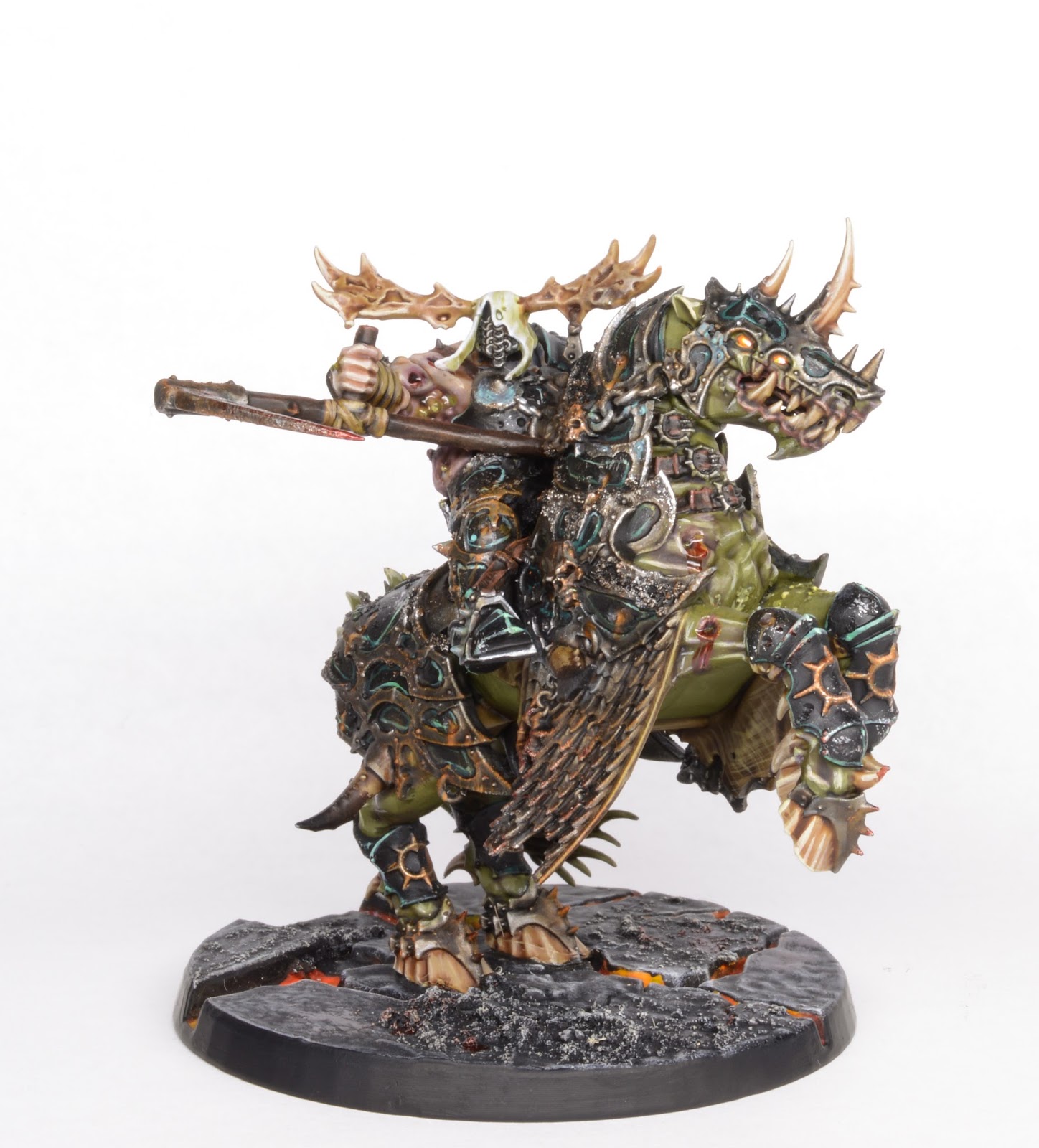 I’ve created a 1000 point Nurgle Rotbringers list to get me started, and I wanted to use the Harbinger of Decay as the general, I wasn’t a big fan of the original model as I felt it was too small and didn’t look as imposing as I wanted it to. So I decided to convert one instead, and I really enjoyed doing so. This model is converted using a Varanguard and Blightkings bits, I used the banner model of the Blightkings and gave him the scythe. I wanted to stay as close to the original model as I could, so I also gave him a sword and shield too. The original Harbinger model has a cloaked head with chainmail, luckily there is one similar to that in the Blightkings kit so I used that too. The Harbinger’s legs are the original Varanguard rider’s legs and I cut the Blightking’s torso to stick on top, there was a bit of a gap in order to get the torso in the right position so I used greenstuff to sculpt the fat on his back. I then stuck water filter microbeads to stick on the back to represent spots. I then wanted to make the model appear more like Nurgle, so I used a drill to create holes and then a larger drill bit to make it bigger. I also added texture paint to the model to create spots on the daemonic horse and to create grime and rust on the armour. 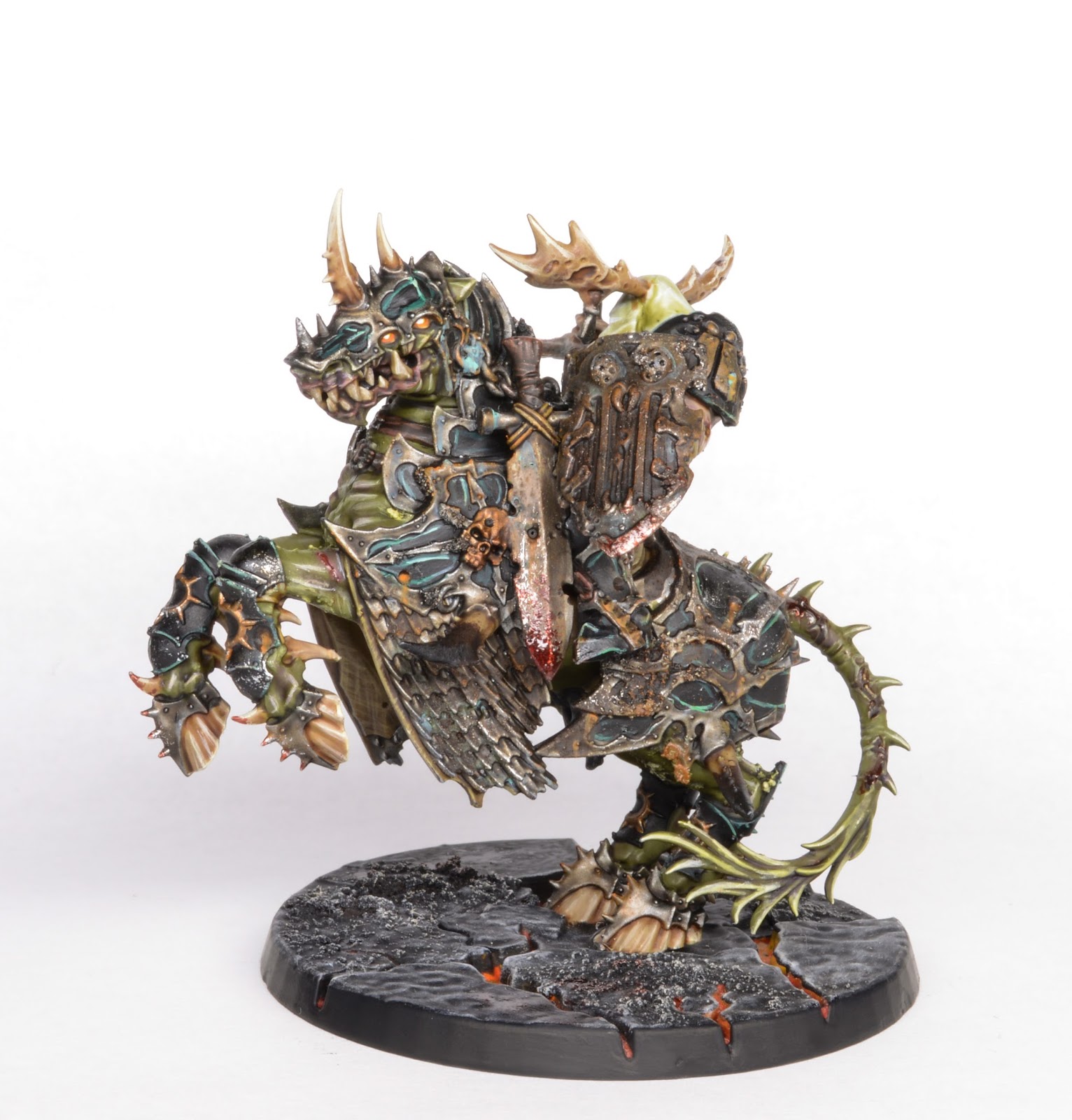 Similar to my Lord of Plagues and Putrid Blightkings, the armour panels are black and highlighted Kabalite Green, Sybarite Green and Gauss Blaster Green. The rust spots on the armour were drybrushed Ryza Rust mostly, but the areas of rust streaks on the holes were Rhinox Hide in the centre, Mournfang Brown on the bottom half of the centre and then as streak lines dripping underneath and then Scale 75 Mars Orange over that. 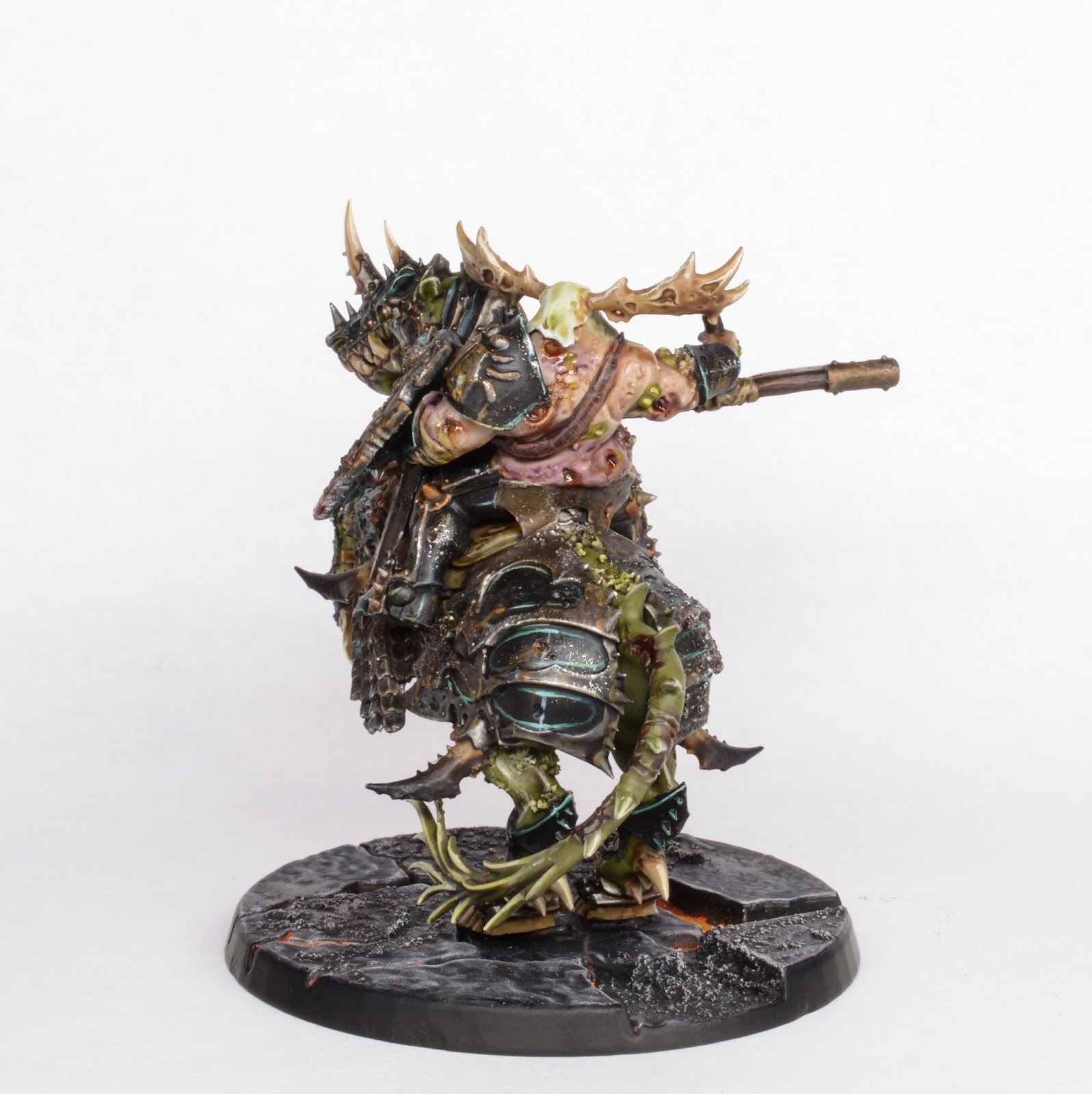 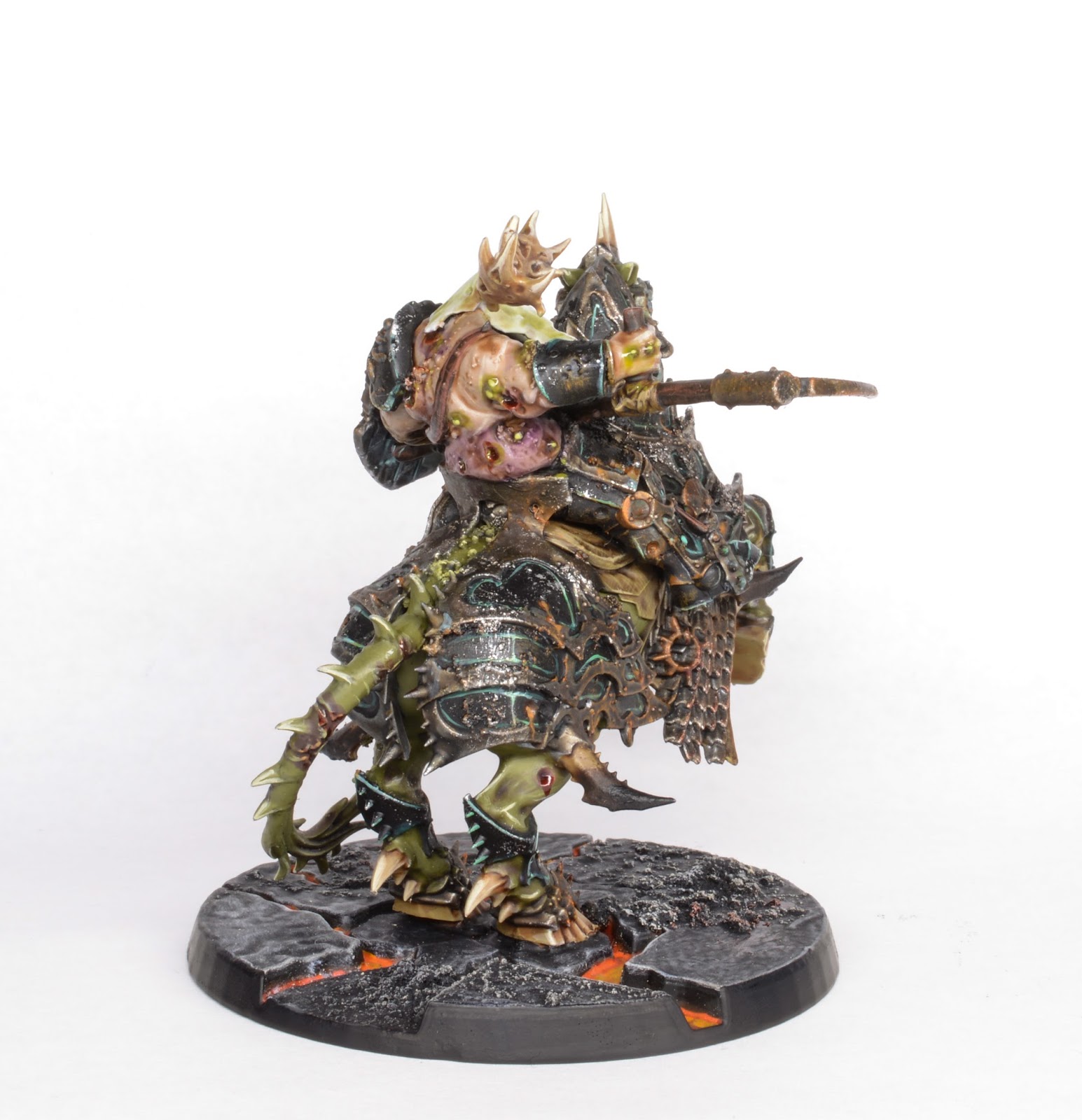 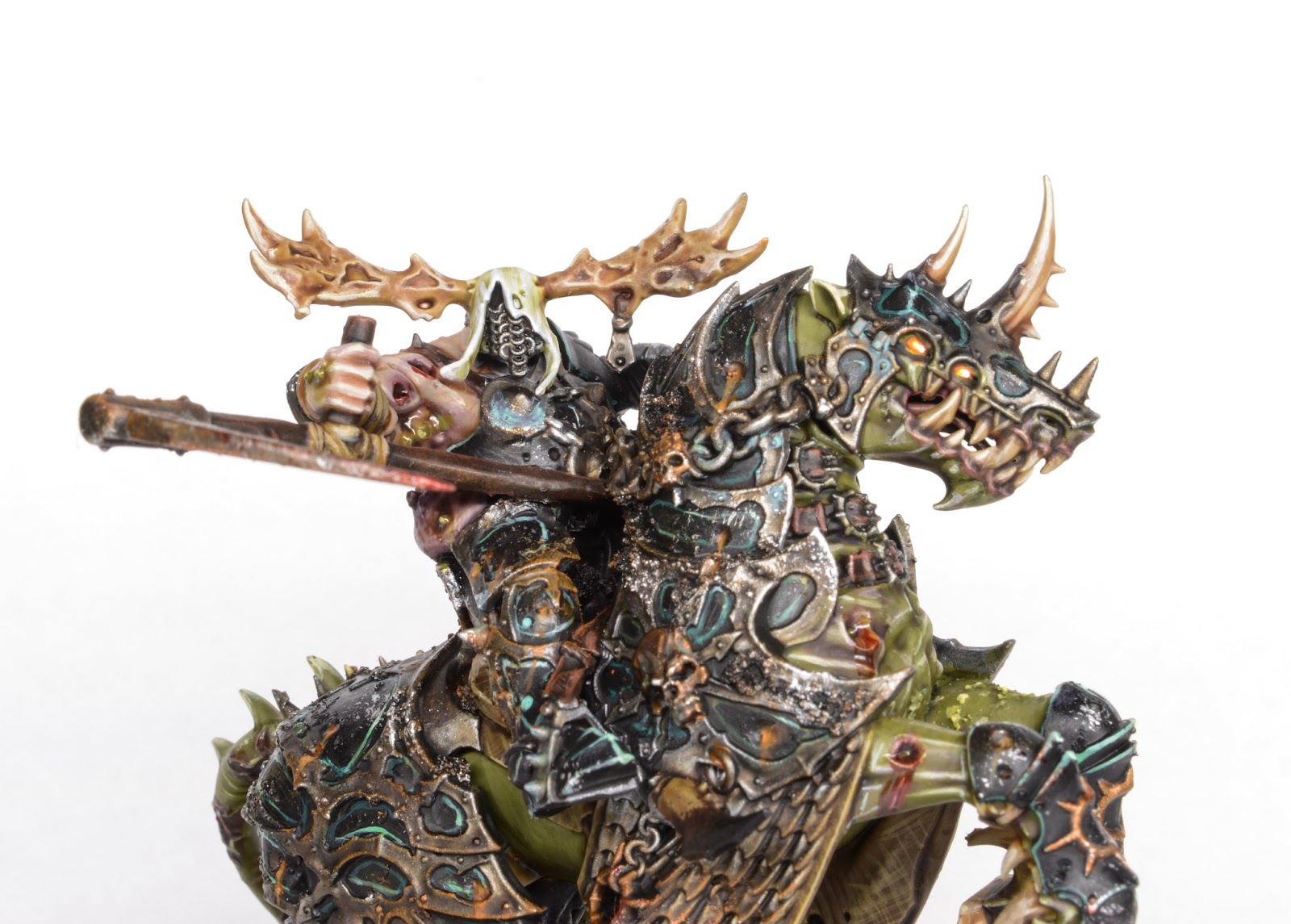 I had so much fun building and painting this model and I’m really pleased with it, I think it’ll look great with my growing army of Nurgle Rotbringers. I played my first game with my 1000 point list recently, which is Harbinger of Decay, Festus the Leechlord, and four units of 5 Blightkings. It was a very fun game, and I enjoyed the synergy between the units, and it’s made me excited to get more of the army painted!

Amy is no longer an active contributor to Tale of Painters. However, you can still browse her archived posts by clicking on this banner.