Hi all, Banzai1000 here with a Sister of Silence. In between painting for my next year’s Armies on Parade project, I got hold of some Sisters of Silence from the new Burning of Prospero box set.

I wanted to try a colour scheme from a picture I saw in the book “Visions of Heresy” by Alan Merrett. The mentioned picture shows a close combat squad called “The Ravenclaws” which I liked very much, even though they carry power axes as their main armament.

So who else is burning for Prospero, or at least for the wonderful models the box set contains? There is also a Custodian Guard on my paint station, but that’s another story. See you soon! 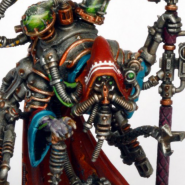 Banzai1000 is a hobbyist from Germany with over 15 years of experience, and a regular contributor to White Dwarf Magazine. He is known for his masterful conversions and loves to come up with spectacular Armies on Parade entries every year. So far he scored five Armies on Parade gold medals, as well as three Golden Demon finalist pins.