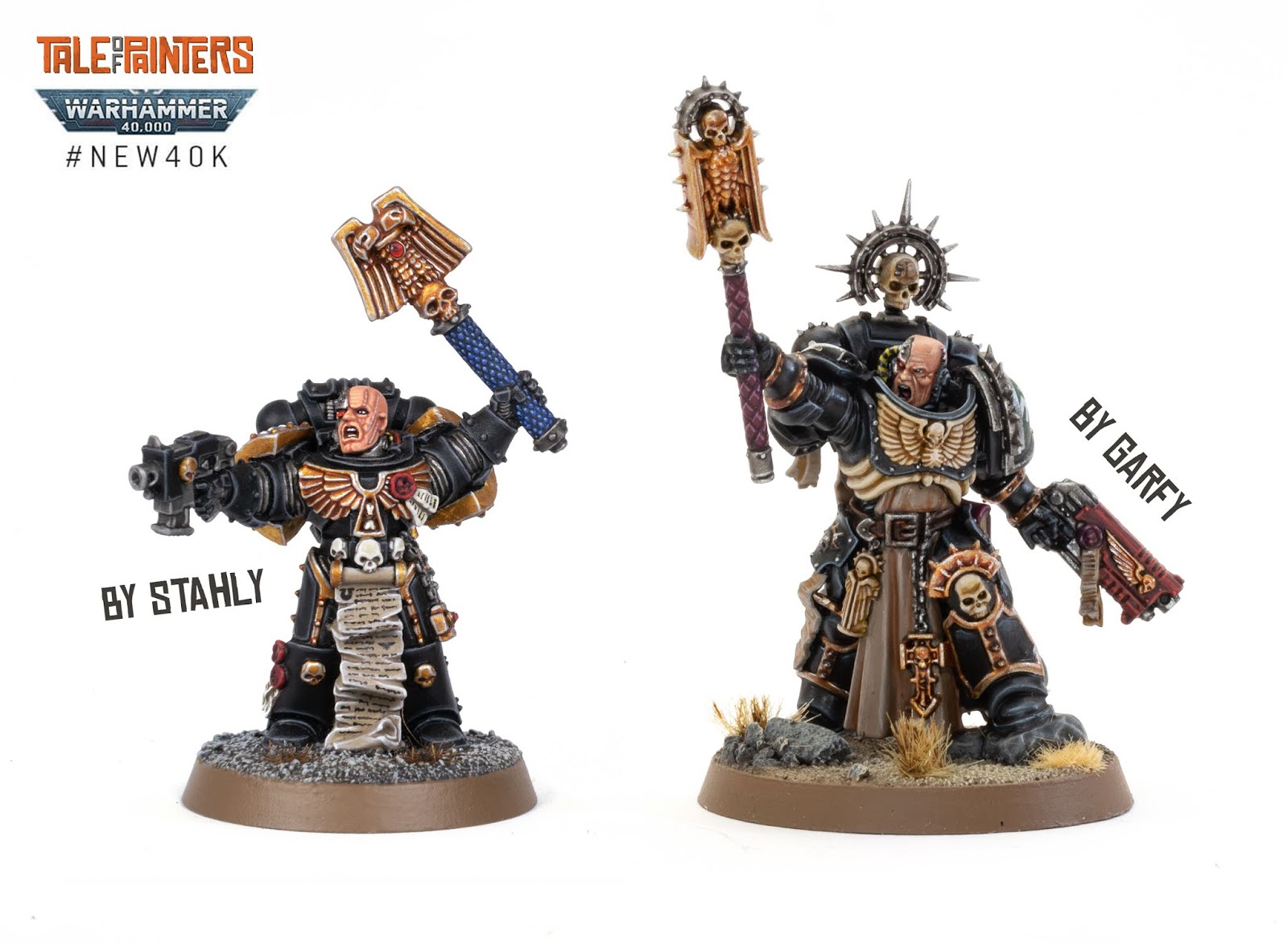 Welcome back to our celebration of Chaplains.These Chaplains are separated by 15 years of sculpting technology, game development and business strategy, whilst Stahly and I are separated by 900km and the North Sea. Last week we shared our work in progress pictures and now Stahly and I can share our finished members of the Reclusiarch. More after the jump.

Garfy: I had the honour of painting the new Chaplain, unless you’ve been living in a cell on the Rock, you’ll know this model is part of the Indomitus launch box set. The Made to Order has closed now and it’s out of stock online. Some stores still have stock at the time of writing but once it’s gone it’s gone. Games Workshop has announced three new Starter Sets and this Chaplain model isn’t included in those sets. He shares a sprue with the Bladeguard, Eradicators, Bladeguard Ancient, Bladeguard Lieutenant and Judiciar so it’s unlikely he’ll ever see a a single miniature release. Maybe that sprue will be part of a start collecting set? 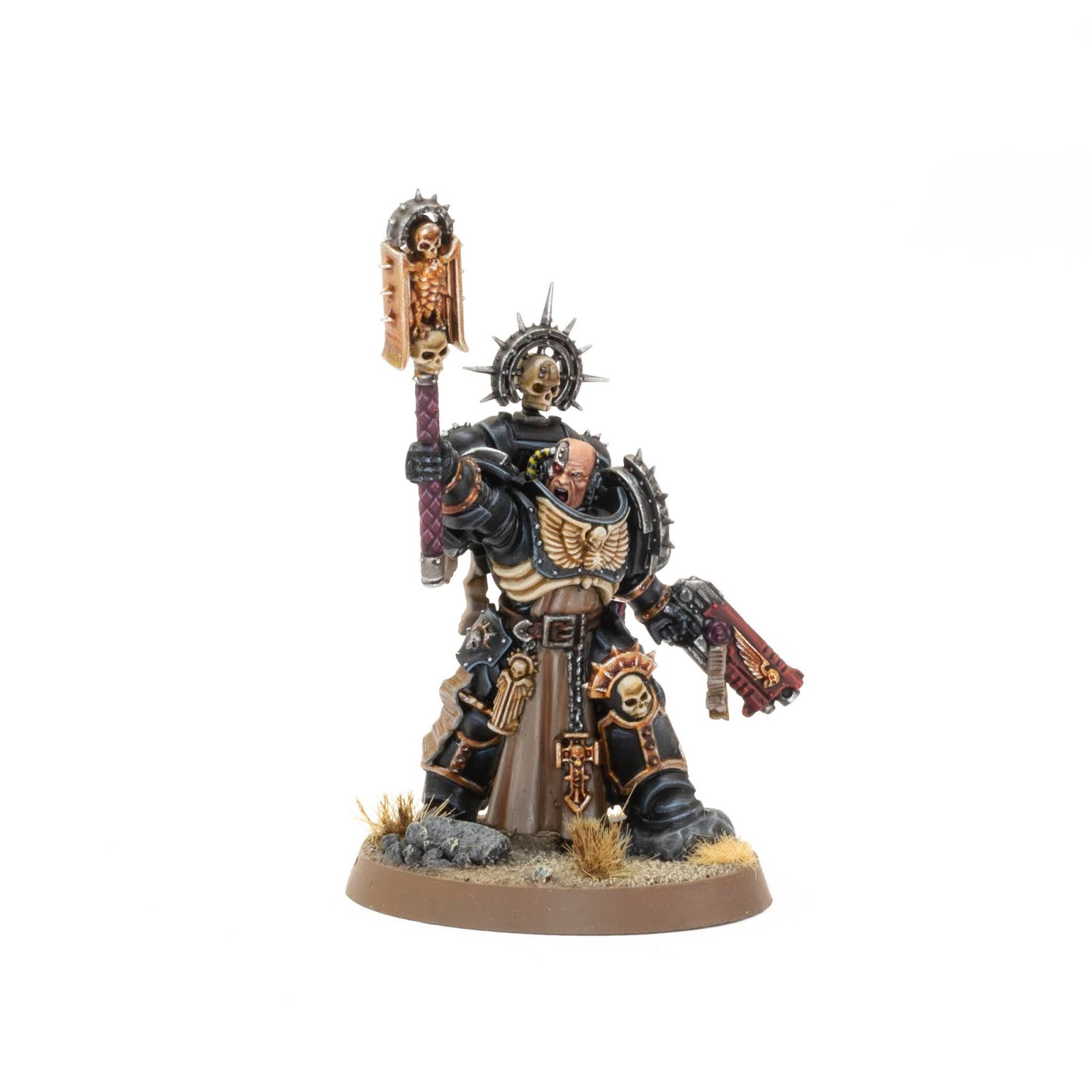 I’d painted the Judiciar a couple of weeks before this model. I was privileged to have received an Indomitus launch set around a month before it was released and this model was the 10th model I painted from the set. I don’t know why I waited so long to paint him because hands down he’s my favourite from the set. I decided early on I wanted to keep him really traditional and use a lot of bone and gold. The bone was painted white and then painted with Ubshati Bone. Skeleton Horde was painted all over and once dry Ubshati Bone was painted over the top picking out all the detail. I carefully lined the deepest recesses with Skeleton Horde. Final edge highlights were Wraithbone. The gold was a lot simpler as it’s Retributor Armour, Reikland Fleshshade Gloss all over, then highlighted with Liberator Gold and then edge highlights of Stormhost Silver. 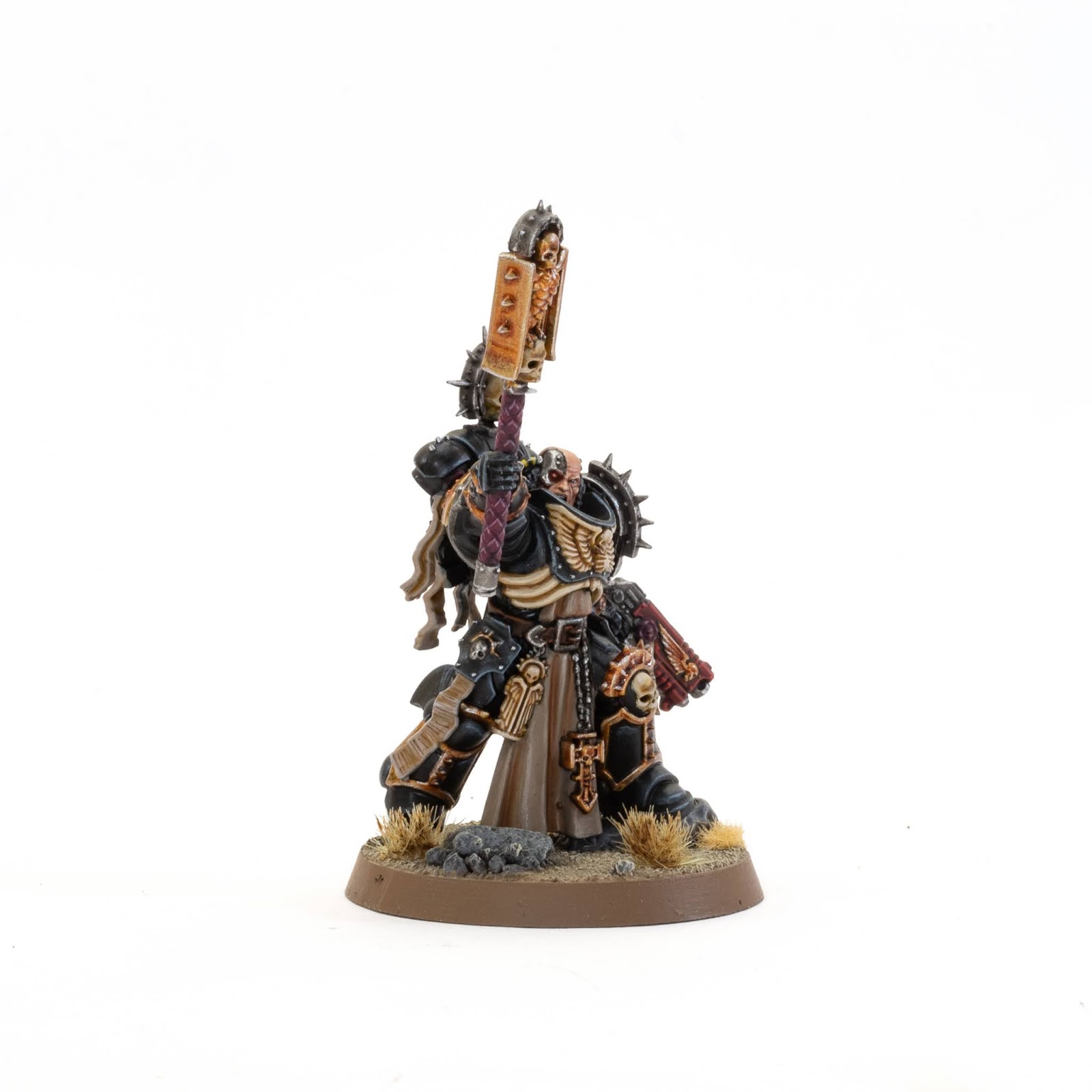 I have a full tutorial for Chaplain Ortan Cassius of the the Deathwatch. I actually followed my own tutorial for the black armour. I do that a lot, my tutorials are my paint recipes. It’s a good idea to keep a note of all your paint recipes. A neat trick I like to do is line up the paints of a step in order and take a picture and add it to my notes on my iPad. 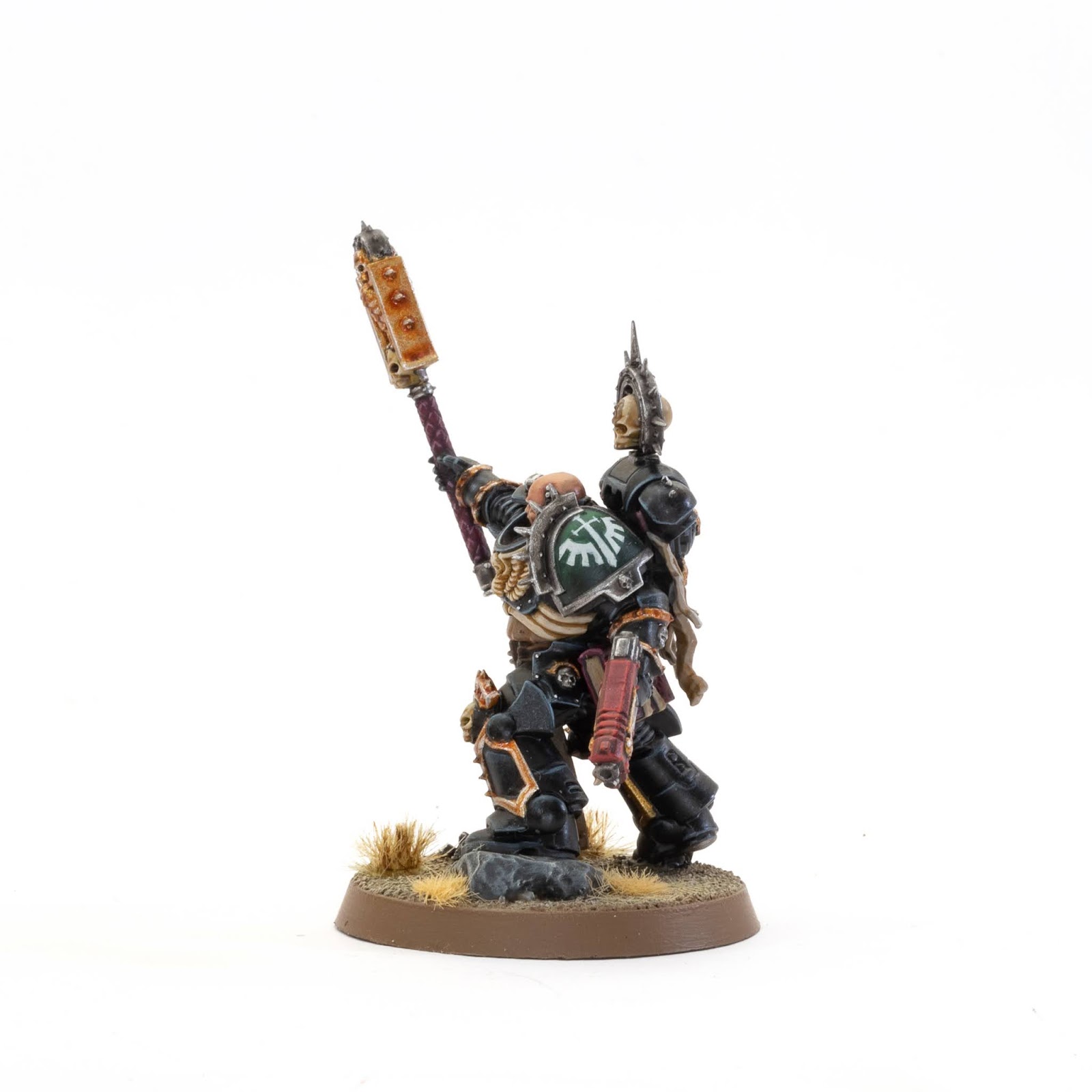 I have three Space Marine armies: Blood Angels, Space Wolves and Dark Angels. Only my Dark Angels have Primaris units and in fact it has more Primaris than First Born. This Chaplain was always going to be a Dark Angel. Interrogator Chaplains are a huge part of who the Dark Angels are. Not only are they the spiritual leaders of their battle brothers they’re also charged with getting heretical Fallen Angels to repent their transgressions against the Chapter. For every Fallen who repents that Chaplain receives a Black Pearl.

I thought this would be an interesting comparison and an excuse to line up all my Chaplains (the Judiciar isn’t a Chaplain, but he is a member of the Reclusiarch so I included him). I must say the Primaris ones are my favourites hands down. I think it’s the overcoats, belts and tabards, it reintroduces the warrior monk vibe to these spiritual leaders. The rib cage is also a super nice touch. The Dark Vengeance First Born Chaplain looks so ornate, he has so much going on and having a cape on a Chaplain is a little weird. 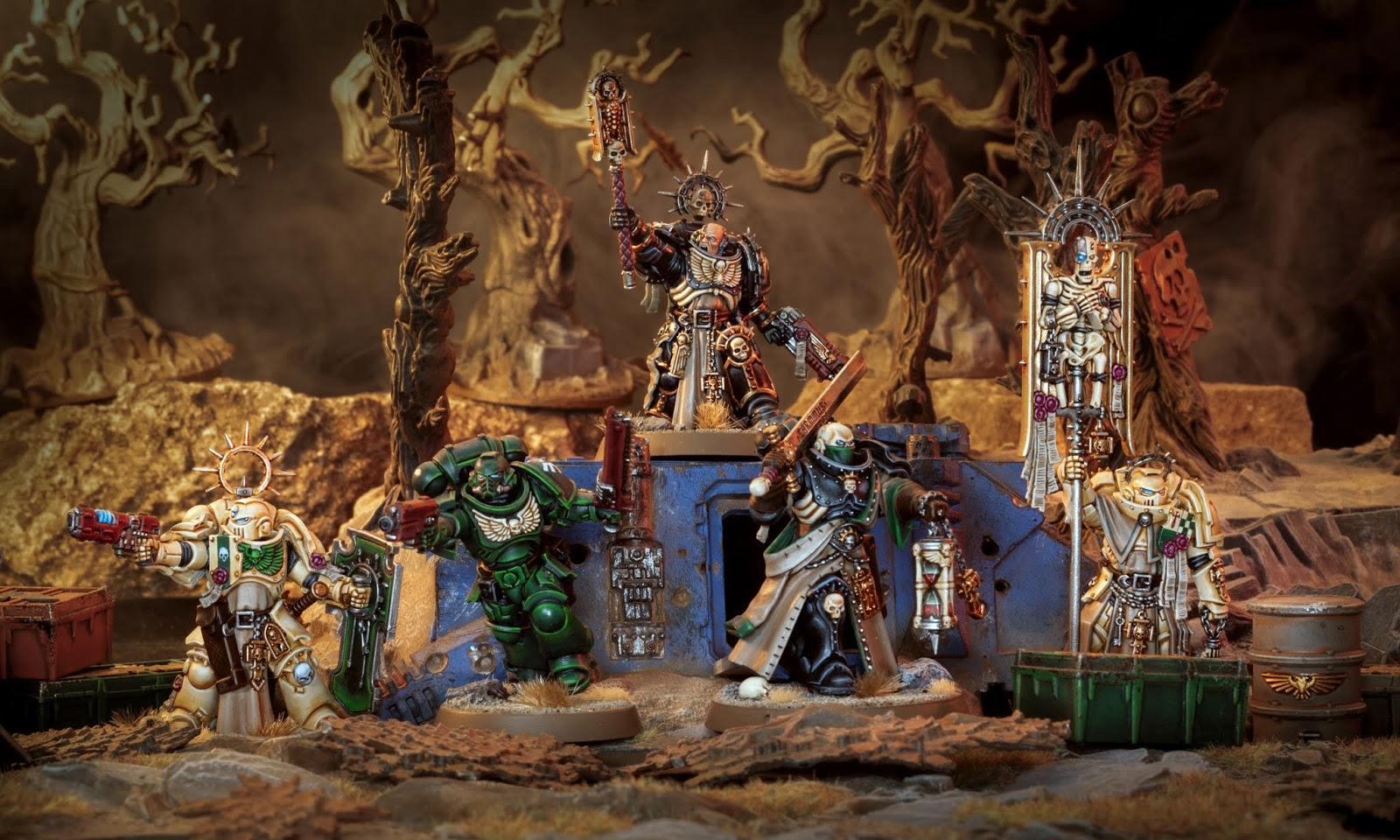 With the completed Chaplain it brings my total number of painted Indomitus Adeptus Astartes to five. I think I might paint the Captain next as that will complete all the characters from the set. But first, It’s time to hand over to Stahly.

Stahly: My Chaplain is painted in the livery of my Ultramarines collection I started over 10 years ago, and has been refined and repainted two times since then. The paint scheme stayed pretty much the same though, so I used a lot of vintage paints like my favourite Ultramarines hue of blue, old foundation paint Mordian Blue. You can see it on the shoulder pad and the heft of the Crozius Arcanum. Also notice the skin tones, back then we had old Dwarf and Elf Flesh, which are much more vibrant than Cadian Fleshtone and Kislev Flesh. All the recipes can be found in my Ultramarines painting tutorial. 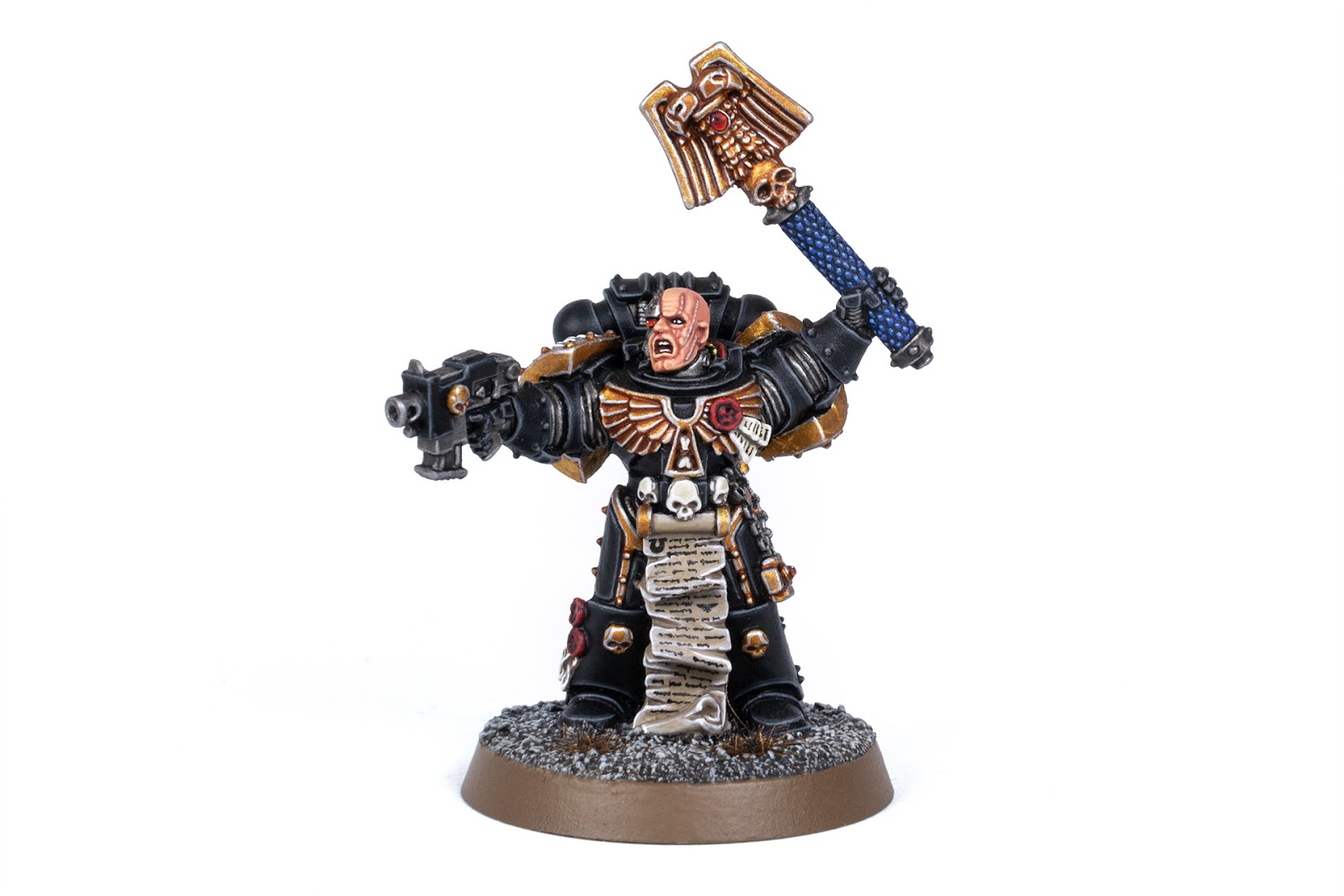 I spent a lot of time making sure the highlights on the armour are as neat as possible. These old manually sculpted metal models aren’t as perfectly shaped as modern digitally designed plastic sculpts, so I feel you need to take extra care with your edge highlights to make up for it. Notice the yellow cable with hazard stripes around the neck? It’s a bit hard to spot in the picture. Garfy finished his model first and showed it to me, which inspired me to paint the cable yellow as a nod to his model, which has the yellow cable on its face implant. 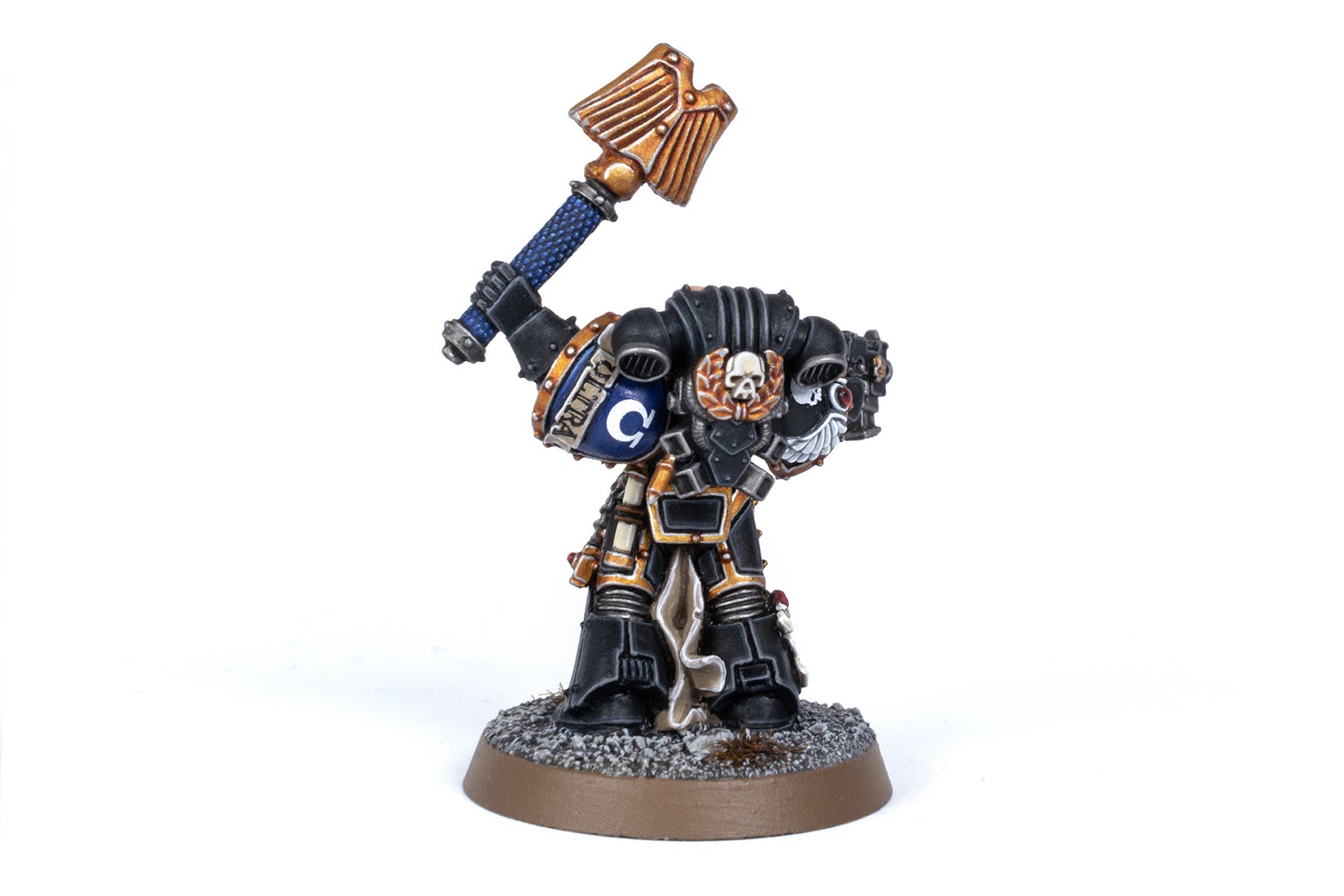 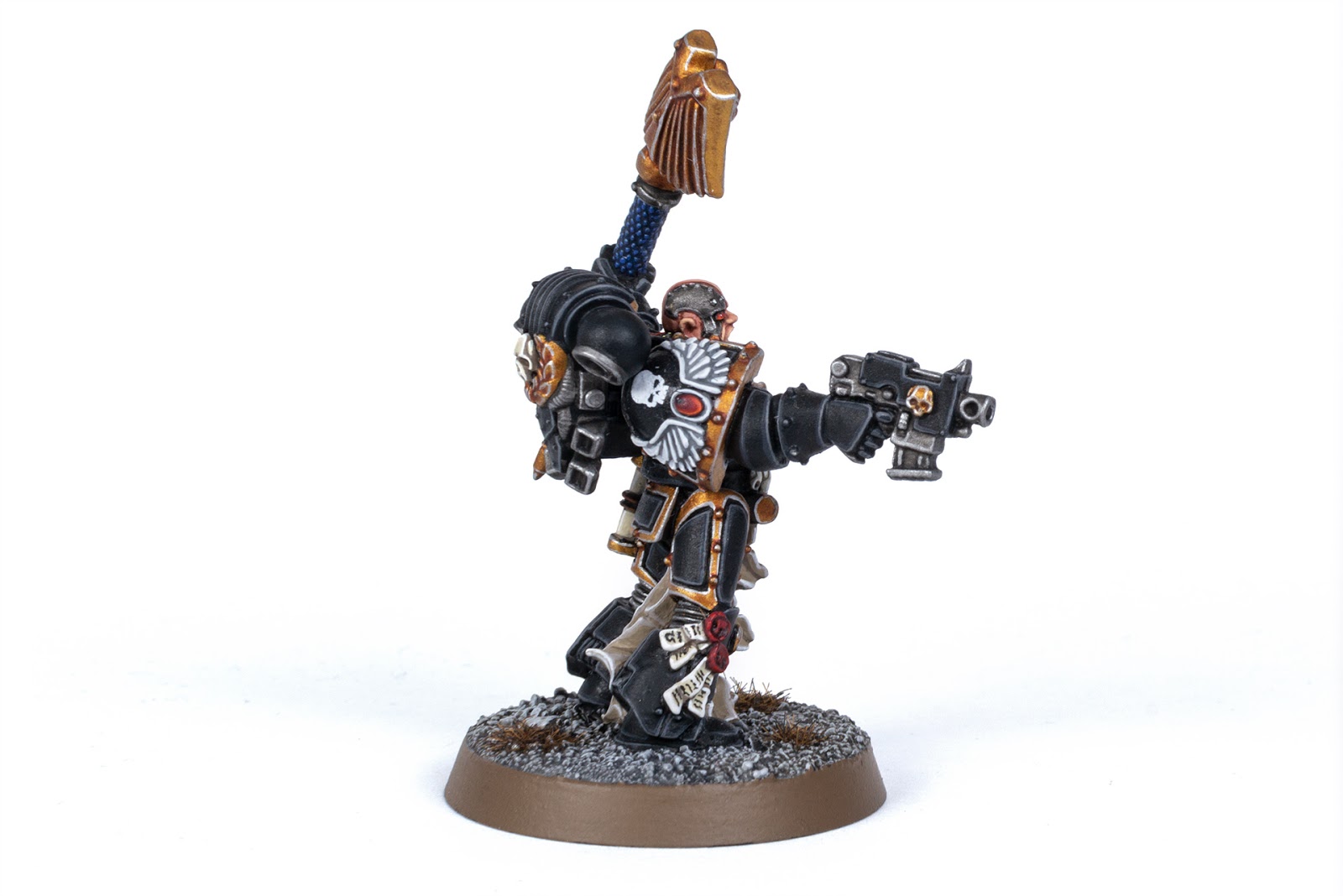 It’s interesting to see how the scale and size of Space Marines have changed over the years. From left to right: 4th Edition starter set Tactical Marine, 4th Ed era Chaplain, MkIII plastic Marine, Brother Dolor from the Space Marine Heroes range, Primaris Intercessor. You can see that even back then, the Chaplain was a bit on the small side, his lower legs a millimetre or two too short. Nevertheless, I still have a soft spot for this model.

Make sure to check out part 1 for some more background information about these two models. 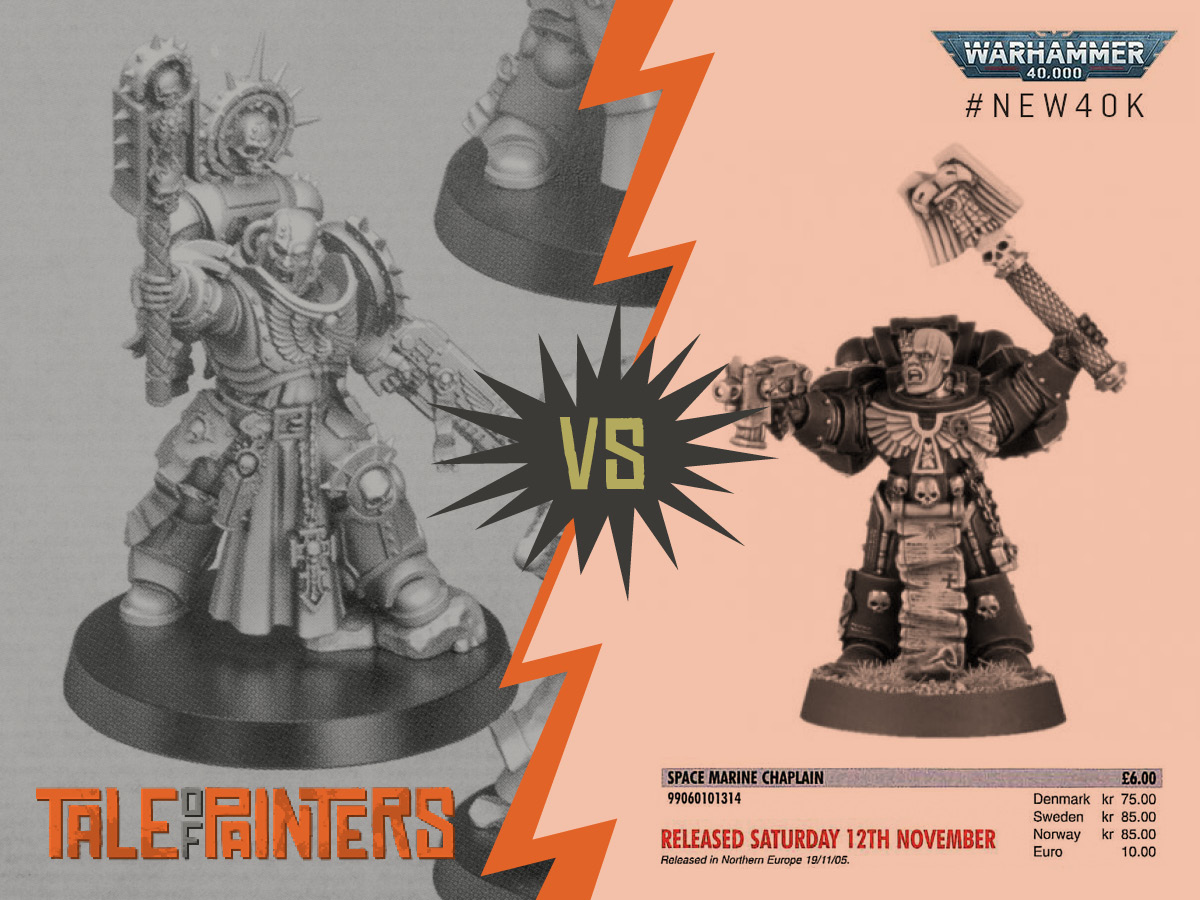 What’s your favourite Chaplain model? Have you painted the Indomitus Chaplain yet? Leave a comment or reaction below.