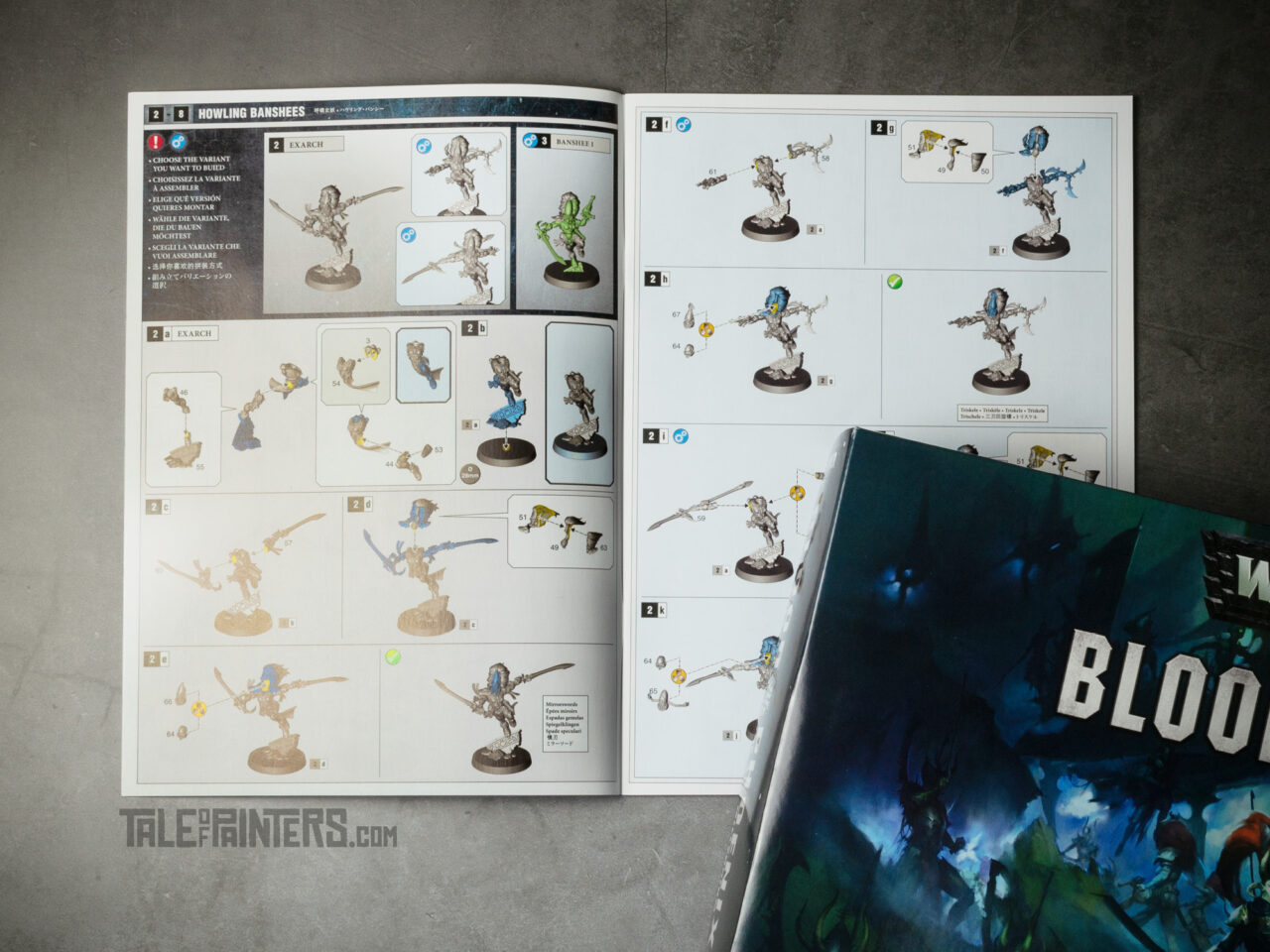 If you ask an Eldar collector what she*he wants, she*he will tell you this: plastic Aspect Warriors. In 2020, Games Workshop heard our plea and, after 14 years, released another Aeldari warrior aspect in plastic: Howling Banshees, harbingers of woe, arguably one of the most iconic Craftworlds units. In this (overly) detailed review we take a look at the sprues, the various Exarch options, compare the models to Jes Goodwin’s concept art and also see how they scale with the former metal Banshees and other Aeldari models.

The new Howling Banshees plastic kit builds five models and comes with three small size sprues,  a full-colour assembly guide, five of the new 28mm bases, and a single 25mm base for the little statue piece. One of the five Howling Banshees can be built as an Exarch with three different weapon combinations.

The regular Banshees are multipart models, but don’t have many assembly options as there are no new weapon options and the poses are fixed. Heads are locked in specific positions because of the large manes and the shoulder guards that are connected to the manes. However, each model can be assembled with a helmet or a bare face with a speaker mouthpiece (but remember there are only five manes and neckpieces). Arms are separate, but each pair of arms is meant for a specific body. However, the arms of Banshees 1 and 2 are somewhat interchangeable when you remove the little sockets as these models share a similar pose, as are the arms of Banshees 3, 4, and 5. Proper ball socket arms like we had on Guardians or Dire Avengers would have allowed more flexibility.

One model can be built as an Exarch, who allows much more customization: All three weapon-load-outs are there: mirror swords, executioner (can be built with an outstretched hand or and arm holding a shuriken pistol), and, for the first time available on a model, a triskele plus shuriken pistol. There is also an Exarch specific upper body with a long sash wrapped around the hip that replaces the upper body of a regular Banshee, three Exarch helmet options plus a screaming bare face, and a larger piece of rubble for the Exarch to jump off, so the model will stand out from the rest of the squad.

Last but not least, we have a little statue of Morai-Heg that you can put on the included 25mm base, for example as a mission objective marker, or add to a terrain piece or larger base.

I really love the design of the Banshees in this kit, it’s a very faithful adaption of Jes Goodwin’s original concept sketches. Compared to the 4th Edition era models, the only design changes I could spot are the more voluminous manes and the round toe boots reminiscing of classic Japanese socks. The poses are more dynamic and three-dimensional as you would expect by today’s standards. Each model leaps from a small piece of broken Aeldari masonry, similar to Harlequins but less acrobatic and more dancing. 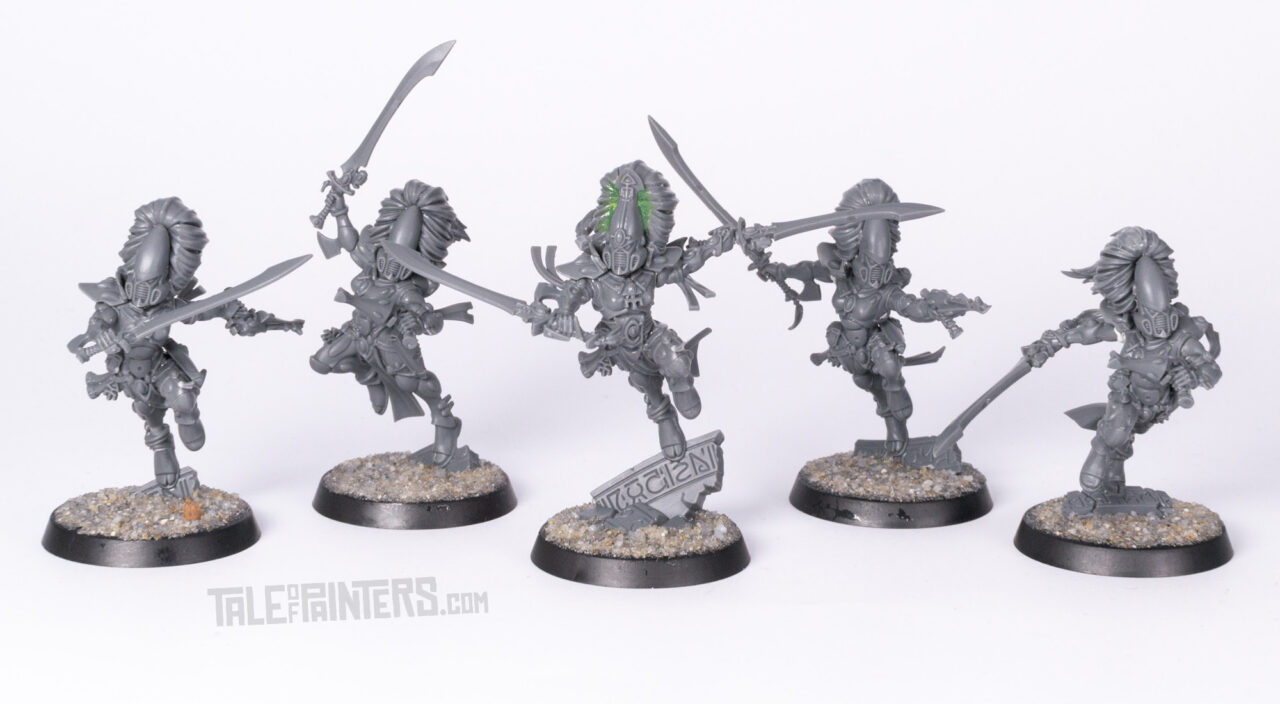 Scale-wise, they are minimally larger than their former iterations, but because of their poses, they don’t look too much out of place with older kits like Guardians and Dire Avengers (unlike for example Yvraine and the Visarch, who tower over models like Dire Avengers or Drukhari Wyches). They scale well with newer Aeldari kits like Harlequins and the plastic Spiritseer. Like the new Incubi, the models are provided with the new 28 mm base size, which I guess becomes the new standard-size for Aeldari. Updating base sizes is always a pain, but I think that 28mm bases fit the size of these models perfectly. 25mm bases would have made the models prone to falling over, and 32mm would have been too large, so overall, I welcome the change.

So, while the kit definitely raises the bar for future plastic Aspect Warrior releases, one thing I’m not completely happy with is the Exarch model, sadly. Now, there are a lot of options and specific parts, but I have a couple of nitpicks.

First, the Exarch’s upper body. I feel the way the sash wraps around the hips adds too much bulk and the large ornament draws too much attention to the belly. I also think the rune above the chest sticks out in a weird way. I would have preferred a design closer to Jes’ concept art.

Then, the Exarch’s pose. It works really well with the mirror blades and triskele, but with the outstretched executioner, I feel it looks a bit unbalanced, more like the model is falling over. I would have preferred a two-handed grip like on the 4th Edition Exarch. Finally, I have some issues with the heads. The bare heads are awesome, but out of three Exarch helmets, I only like the elongated helmet. The crowned helmet has wider spikes than in the concept art or the 4th Edition model, which I think is not a change for the better, and the braided helmet’s two braids are too small and stick out in weird angles (also don’t work with the mirror blades as the ribbon on the left arm moves in a different direction than the braids). Plus, all Exarch helmets (except for the braided helmet) leave a gap between the backside of the helmet and the mane, which looks weird in my opinion. I had to fill the gaps with green stuff.

All in all, pretty minor complaints and there are enough parts to build an Exarch I’m happy with. The models are great and should please all Eldar fans.

Assembly-wise, the models are very straight-forward to assemble as the number of options is fairly limited. The kitbashing potential is there but requires advanced modelling skills as the arms don’t feature the same sockets as Guardians or Dire Avengers and the heads are connected with the manes and shoulder guards. At least the Exarch has a lot of parts to choose from. Mould lines were minimal, and all joints are cleverly hidden so there is no need for time-consuming gap filling, even on the three-part manes. The models are a joy to paint and look at, with their dynamic poses and perfect proportions, but expect to spend a lot of time on them to do them justice, highlighting the hair takes time, I spent about 45 minutes on a single model just to paint the manes. I recommend leaving the sword arms off as it makes the models easier to handle when painting. And take care with the little ribbons on the upper arms and pistol magazines hanging from their belts, they are very thin pieces and snap easily while painting.

Gaming-wise, Banshees are fast with their 8″ inch movement and the availability to advance and charge, but they are fragile with T3 and a 4+ save. The recent update that made their power swords strength 4 helped them a lot, but with their low number of attacks, they’ll still struggle to clear basic Space Marine squads from the board if they don’t outnumber them vastly. I think currently, their best use is to tie up weaker gun line units. The 9th Edition codices so far proved that the rules development team isn’t afraid to make bold changes, so I hope a new Craftworlds codex makes this iconic Warrior aspect as deadly as it should feel.

RRP is 42.50 Euro / £32.50 / $55 for five infantry sized models, ouch. That’s way above similar units in other ranges, in fact the most expensive 5-model-on-small-bases-box. The models were available in the Blood of the Phoenix campaign box, one of the few campaign boxes that didn’t sell out instantly, probably it was the most expensive campaign box so far and had a lot of old models like a Vyper and Falcon that longtime Aeldari collectors will have dozens of. It seems that Eldar aren’t big sellers anymore and are priced accordingly. Still, it’s a very harsh price to swallow, considering Dire Avengers were around 30 Euro for ten when they came out, before they were repacked into five for 26 Euro and then increased to 30 Euro.

Perfect plastic recreations (or almost perfect in case of the Exarch) of a classic Eldar warrior aspect that should please any Eldar collector if they don't mind the outrageous price tag and lacklustre rules.